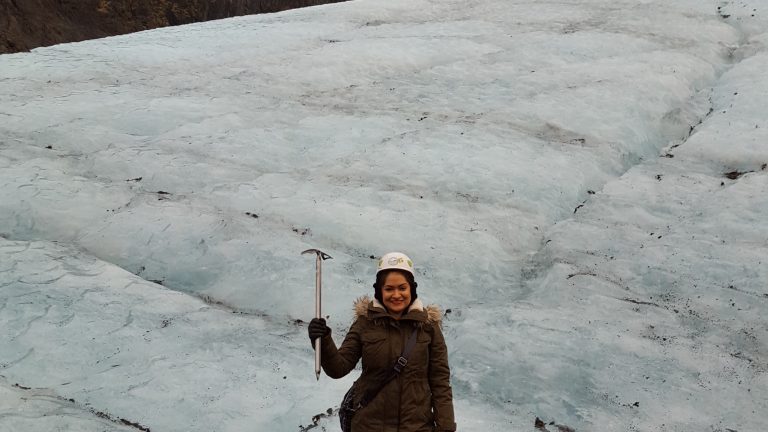 On a particularly frigid morning on our 1-week itinerary to Iceland, we arose before daylight with the intention of “conquering the glacier”. As most “planners” do, the majority of our excursions were carefully planned ahead of time (by yours truly of course J) and embarking on a glacial hike was one of the many “must-do” activities on our trip to Iceland.

A friendly chap from the Arctic Adventures tour company picked us up from our hotel in Rejkavik and took us on a scenic drive towards Vatnajokull glacier in the South of Iceland. At the lodge, I felt excitement rush into my chest at the thought of what we about to attempt. One of the guides who would be leading the hike and was assisting me with my crampons asked “Have you ever hiked a glacier before?”. No it’s my first time, I replied with an exuberant squeal! A short jeep ride and group instructional meeting later, we were at the foot of the glacier, crampon-clad and ice axe ready to take on the climb!

The incline before us was steep indeed, yet I still did not feel daunted at thought of climbing it. I glanced up at the hike ahead and instead, felt so lucky to be embarking on such an adventure! In single file, our group proceeded to climb, no one uttering a word, one foot at a time, digging our crampons into the ice. Up we went, carefully following the guides instructions, astutely monitoring our steps and techniques, acutely aware that “slipping”, could be an imminent fate at any point.  My husband Jeremy hiked behind me, ready to catch me in the event that a fall should occur.

The group kept on climbing, and as we ascended, we all fell into a comfortable rhythm of one foot in front of the other. We had grasped the initial techniques of hiking an ice-covered surface, and all began to relax with the confidence of their newly-acquired skill. Soon, playful chatter and laughter could be heard amongst the group. We carried on for some time and before long, we found ourselves atop the glacier! A sense of joy filled my head and heart, which was soon followed by a sense of awe, as I surveyed the view from the glacier’s top. Naturally a few pictures were in order as we basked in the sense of accomplishment of making it to the top. Jeremy being a perpetual jokester, had to take a few comical photos with the ice axe. Somehow, I wasn’t as amused as he was 🙂

As the amusement and photography fun ended, we prepared for our descent. I made the assumption that we were going to trek down the same route that we had ascended but was surprised to learn that the guide had a different route in mind. He was taking us to an ice cave! Ahh an ice cave! I had forgotten about this part of the itinerary! I had been so enamoured with the glacial hike, the feel of the crisp air on my face, the weight of my crampons, the “butterflies in my stomach” from teetering precariously on icy steps, filled with the adrenaline from the thoughts that I could fall to my doom at any moment, that I had forgotten about an incredibly thrilling aspect of visiting this amazing country. In fact, it was a photo of the “crystal caves” that I had seen on Pinterest that made me book a trip to Iceland in the first place. Several months prior to the trip, I had seen an incredible photo of an ice cave in a remote part of Iceland, where the ice gleaned like blue crystals in the daylight. I was one of the most stunning photos that I had ever seen and I immediately started planning my trip to the land of “fire and ice”. Now, here I was, on the verge of experiencing this amazing creation of nature.

After some brief instructions on descending the glacier, our guide led us down several narrow icy steps already carved into the glacier. He regretfully warned us that the impressive ice cave that he had intended to take us to was not safe to venture into.  Although it was still cold by general standards, Iceland was experiencing a warmer than average winter, which made the ice caves prone to “melting”. A melting ice cave meant that the possibility existed of a cracking and collapsing cave, condemning all who ventured in, to an untimely fate. Due to these safety concerns, the itinerary was altered to include another ice cave that was much smaller but much safer.

I felt a twinge of disappointment as the vision of the crystal caves from the photo vanished in my head.  The unpredictability of travel and of mother- nature couldn’t have been any more apparent, but such is life. My disappointment, however, was short-lived as we had arrived at the entrance to the cave. I felt my adrenaline kick in again as the guide instructed us on the how to use the hanging rope to maneuver into the cave. We squeezed our way into the cave’s entrance and stood quietly, taking in our surroundings. The cave was enclosed, with a larger entrance followed by dwindling space, with no blue ice in sight. I smiled to myself. Although this was not the cave that I had intended to experience, I relished the opportunity to be in Iceland at that very moment, and to have the opportunity to stand in a cave made of ice! I felt incredibly blessed and happily chatted with my husband and the guide, savouring the moment.

We exited the cave and began our descent down the monstrous glacier. Halfway through the descent ran a stream of water so clear, that it was impossible not to stare. The guide commented that it was some of the purest water in the world as it came straight from the glacier. Although I had mastered the use of my crampons and had thus far made it up and halfway down the glacier without a hiccup, I felt uneasy bending all the way down to sip from the stream, as the ground beneath me felt a bit slippery. Not willing to take the chance of tumbling to my death, I asked Jeremy if he would be willing to drink from the stream. He hesitated but after I mentioned that it was some of the purest water in the world and that he may not have another chance ever in life to do this, I had him convinced. I was so proud that he seized the opportunity to drink straight from a glacier!

As we continued our descent, an unexpected scream pierced the frosty mountain air, followed by several loud gasps and a flurry of commotion amongst the hikers up ahead.  Someone from our group had slipped on the precarious incline beneath us and tumbled a few feet down the glacier! The guide swiftly came to her rescue. Luckily, she was neither severely injured nor shaken up enough not to carry on with the rest of the descent in prior fashion. Our group quickly resumed the rhythm of our glacial descent, this time in somnolence, as we steadfastly focused on our steps and technique.

Once safely at the glacier’s base, and free of my heavy hiking gear, I chose to bask one last time in the entire experience, lapping up the feel of the fresh, chilled air on my skin, the adrenaline that still rushed through my veins, the sense of pride that I felt for hiking the glacier and the stunning beauty of my surroundings. I felt so grateful for the experience. We thanked and tipped the guides and as the jeep drove us back to the lodge, I pumped my fist in the air and screamed “Yeah! We conquered the glacier!”.

Disclaimer: I am in no way shape or form affiliated with the Arctic Adventures tour company, but I do recommend them if you are considering a glacial hike while in Iceland.

Hiking a glacier is a dangerous activity and should be undertaken with a guide if inexperienced. LovePeaceandTravel  assumes no responsibility for any consequences due to glacial hiking.

REJNIFJARA BEACH, ICELAND- 3 REASONS THAT YOU SHOULD VISIT