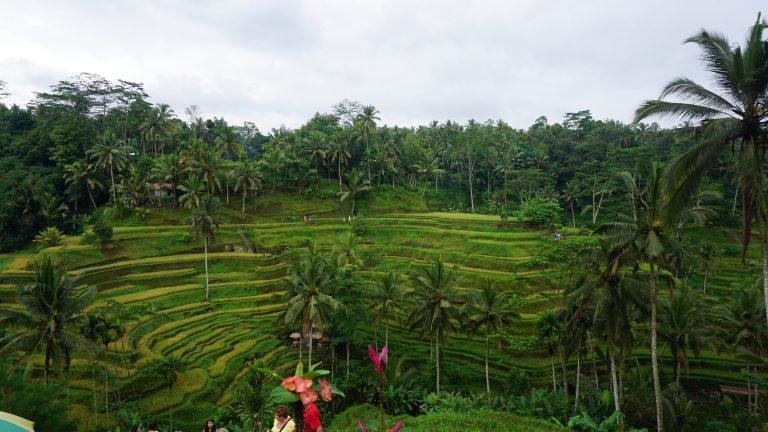 My excitement was uncontainable as I reported to my husband that the tickets to Bali, Indonesia had been booked. Traveling to Bali had been a dream of mine for nearly two years and the realization that it would finally be a reality was enough to make me grin from ear to ear and squeal with delight.

My husband on the other hand, was more excited about visiting Sydney, Australia, which we would also be visiting on another “leg” of the trip, but to each his own. Australia was the first stop on our itinerary, then onto Bali, Indonesia, and then finally onto Singapore City, Singapore.

When our travels through Bali finally occurred, it was everything that I had read about and dreamt about. The island was so lush with rainforests, the people were warm and the island was steeped in a deeply spiritual aura that one could not escape.

Our travels continued according to our itinerary; we visited the expansive and breathtaking rice fields, experienced the sacredness of the many wondrous Hindu temples, ate exotic fruit, witnessed Batick making, visited a coffee plantation, during which we tried some of the most expensive coffee in the world, swung through the rainforest on a rope swing and visited a sacred forest with some incredibly cheeky monkeys. We also shopped for souvenirs, took a Balinese cooking class and met countless interesting and kind local people.

The trip had turned out to be filled with the most amazing experiences and surpassed all of my expectations. Then, the unexpected occurred: A Volcanic Eruption! Mt Agung was erupting!

Bali along with the remainder of the Indonesian islands are ripe with volcanic activity. This volcanic activity which is also part of the allure of the Indonesian islands, is also the reason that the islands are dubbed as part of the “the Pacific Ring of Fire”. Prior to our visit to Bali, one of the islands volcanoes, Mt Agung was on “watch” and had been for the past month for a possible eruption. The impending eruption of Mt Agung however, did nothing however to stop travellers, including my husband and I, from visiting the island. I had dreamt about visiting the Monkey Forest and the Rice Fields and felt so internally compelled to make my vision a reality, that I decided to “take my chances”. Although I did make my visions a reality, “taking my chances” proved to be a risky gamble indeed.

Initially, we were unaware that the eruption was occurring. We were scheduled to fly out of Bali and into the Changi aiport in Singapore, and proceeded with our plan. However, on our way from our hotel in Kuta back to the Nuraj Rai airport, I got a “funny feeling” based on the vibe of our drivers. I dismissed my uneasy feeling that something was amiss. However, after our drivers had dropped us off at the airport and departed, we learnt that our flight was cancelled, and that the Nuraj Rai airport would be closing due to volcanic ash being spewed in the air from the powerful volcano. All flights out of the island were cancelled and we would not be flying to Singapore that evening after all. Mt Agung was indeed, officially erupting!

A murmur of voices began to form into a collective hum as fellow passengers speculated as to what would occur next. After a flurry of commotion of restless travellers, we were informed that our airline would be “putting us up” in a hotel for the night with free meals. We would be tucked away on a remote location of the island, literally as furthest away from the erupting volcano as possible. I felt neither frightened nor dismayed at what was occurring. Yes, an unexpected natural disaster was amidst us, but I felt ready to “roll with the punches” and take on the unexpected curve ball that travelling overseas can undoubtedly bring.

Our airline-sponsored lodging was a mid-level hotel, which was actually quite comfortable, with a lovely lobby, bar, and pool. Quite frankly, I was grateful to have a roof over my head, considering that we were in the midst of a natural disaster and also because many others on the island may have needed to evacuate the comfort of their homes or were severely displaced. Actually, we “had it pretty good” and were in “luxury accommodations” compared to most.

My husband and I ate the complimentary and healthy Balinese meals that were provided at the hotel, swam in the hotel pool, exercised at the gym, and explored the surrounding area of Nusa Dua during the day. We shopped for souvenirs at Bali Collection, a popular shopping center in the Nusa Dua area. I found some incredible paintings here for our home, created by local artists and highly recommend checking out the incredible artwork here, if you are travelling to this part of Bali.

Life continued on as normal for us on our extended travels, with not so much as a whiff of smoke from the erupting volcano on the other end of the island. Indeed our airline had placed us in the safest place possible.

The days in Nusa Dua continued on with no word of Nuraj Rai re-opening. We enquired about other possible routes out of the island but they would take considerable time and it was highly possible that they would re-open the airport during our long journey through an alternative route out. I knew that with no immediate way to vacate the country, there was nothing to do but to “make the most” of my time in this amazing place. I felt safe and continued to relish my time on the tiny, sacred and incredible island.

Conversely, my husband was anxious to get home. He was worried about getting back to work, about seeing the rest of our family, about making it out alive. I did my best to calm his anxiety and worries, reframing our situation and reminding him to practice gratitude for all of the amazing things that we had experienced thus far, and that we were incredibly blessed to be in Bali, erupting volcano and all. He continued to feel very restless, but with zero flights scheduled out of the island, and an incredibly long journey by boat as the only other options, he had to choice but to “grin and bear it”.

With much coercion, I convinced my husband to continue exploring our surroundings until it was safe enough for us to leave the island. We visited a local hookah bar, continued to eat incredible food, visited another temple, a tiki bar on the beach, and a place called the “Water Blow”, which I also highly recommend visiting if you are in the Nusa Dua area. It is an incredible area on the coast, where the water rushes up very high in the air as it crashes against the cliffs. If you stand and the right place, you can get incredibly drenched from the spray. And that is exactly what most people seek when visiting the Water Blow, is, in fact to get drenched. We certainly did after a few times of observing where the spray landed and positioning ourselves in just the right way, so as to “get caught” in the wake of the ocean spray.

The Water Blow in Nusa Dua

The days continued to pass, with still no word from the airline or the Indonesian Government. Then, it was during one of our daily strolls in the Nusa Dua area that I realized that my husband was finally relinquishing all angst, to the mesmerizing allure of the island. It was then that we heard the news. We were both sipping water from the same coconut when one of the friendly locals announced that the airport had reopened! My husband who a day or two ago would have literally “jumped for joy”, now seemed only mildly enthused at the possibility of ending our time in Bali. I suspect that he, just like I, had fallen under the “spell of the island”.

As we made our way to the Nuraj Rai airport for a second attempt at leaving Bali, I felt utter gratitude to have had the experiences that we did while in Bali. We not only escaped a volcano completely unscathed, we got an extended stay in Bali and had the opportunity to experience another part of the island that otherwise we would not have seen if our itinerary had gone as planned. We were also grateful to the hotel staff in Nusa Dua who made every effort to make us feel comfortable during our stay. We got the opportunity to meet and interact with some wonderful locals along the way and even discovered some great souvenirs and artwork to bring back home.

Apart from our accidental extended trip, the deeply spiritual nature of the island is an aspect Bali that has left a remarkable impression on me, and is what I will remember most of my visit there. Visiting the temples and experiencing the deep- rooted culture of the Balinese people has been a stand-out experience amongst all of my travels. I would also certainly miss the lush beauty of the rainforests and the expansiveness of the rice fields. And who could forget the $3USD foot massages that are common through Southeast Asia 😉

All kidding aside, as our flight departed towards Malaysia, en route to Singapore, I knew that we were somehow protected by a higher power. We had had the easiest, most enjoyable extended stay in Bali that is possible, given the extenuating circumstances. Our experiences also highlight the unpredictable nature not only of Mother Nature, but also of planned itineraries going awry at times, during international travel. Our unplanned and enjoyable adventures in Nusa Dua, also gives testimony to “going with the flow” of this occasional unpredictability that sometimes occurs with travel, and that purposely creating an enriching experience despite this, is entirely possible. This trip to Bali will always be “one for the books” and will always be a tale to tell of adventure, disaster and great blessings”

Disclaimer- The opinions of the author are entirely her own and based on her own experiences LovePeaceandTravel realizes that her own experiences and inconveniences were minimal compared with the experiences of others who may have been  severely affected by the eruption of Mt Agung, LovePeaceand Travel extends heartfelt sympathy to anyone who was severely impacted by the eruption of Mt Agung but bears no responsibility to anyone, emotional or otherwise based on this blog post.

2 thoughts on ““ Stuck in Bali” – A Tale of adventure, disaster and great blessings.”